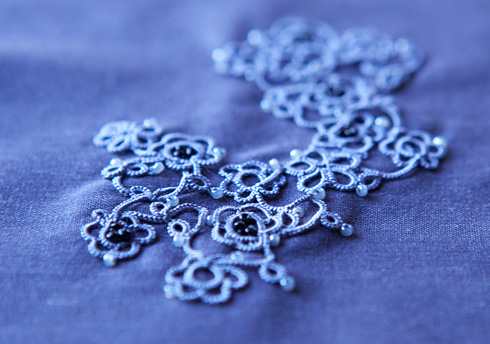 It’s amazing what a difference a camera can make. Mr Occasional Crafter took the above photo on his camera, as for some reason mine just wasn’t really cutting it. It’s far too blue, but I decided not to correct it, because I love it! It makes my tatting look amazing, I think.

Back to harsh reality now, and the photos I took. Sorry!

I’ve continued to ‘doodle’ with my tatting recently, which I’ve rather enjoyed. While one part of me worries that I’m not tatting with a purpose, the other part is quite enjoying wingin’ it. I’ve been tatting daisy chains again – or rather daisies, and then joining some as I go to create more solid shapes. The plus side of this is that it really shows how useful split rings are – without them I’d’ve needed to cut and tie a few times, the minus side is that I could really do with actually planning it a bit to make a more fluid or useful shape.

I’ve been using a lovely silver grey DMC thread (size 80), which tats up beautifully. It seems to have really good stitch definition for some reason – almost more than other colours – and I’ve loved using it. This weekend I decided I’d stitch it onto… *something* and then decide what to do with it. For once, I decided against linen – maybe the tones were too similar, I’m not sure, but it really didn’t look that good. I almost went with black, but at the last minute switched to grey. That old grey sheet I saved from the charity shop is really earning its keep!

I pinned it out before stitching it, as you can see. Then I unpinned it as I stitched and completely changed the arrangement bit by bit. It seems appropriate. Tatted as a doodle and stitched as one too.

Sorry – the photos really are all over the place in terms of colour, but at least you can see the layout here – and the beads. I sewed the lighter beads on first (they’re actually a silvery grey), and then at the last minute, after realising I had some, I sewed the black beads on for some contrast. I wasn’t sure about them initially, but actually I think they work quite well.

I’m not sure yet what I’ll do with it… maybe a panel for another drawstring bag? It’s a bit big for a lavender bag. Actually, maybe I could use it as a panel on a fabric basket? I’ll have a think. All suggestions gratefully received!

Either way, I really enjoyed making it. Also, it does look rather nice. So nice in fact, I’m quite surprised I actually made it. (I’m not showing you the back though).