Tatting is a funny one. Really, I should be designing my own patterns by now. I am a designer, after all – and one that happens to love repeat patterns too. That said, I often think tatting for me is like smoking for other people. I need a quick fix, there and then. Something to calm me down, occupy my brain, keep my fingers quiet.

There’s also the fact that I like to see a finished ‘thing’ at the end of it. Something I can look at and see as complete – maybe use it, maybe not, but know that I’ve started and finished something. Like a lot of people who work with computers, the work I do in my day job may change. Things aren’t ever completely ‘finished’ with the work that I do. Or at least rarely. Things gets signed off—but before you’ve had time to acknowledge it, it’s on to the text thing.

Which means that I like tatting other people’s patterns. You can choose one you like, learn it, know that it’ll look good at the end. That someone has worked out the stitch count, fixed all the niggles. A quick win. No stress. Ok – some might be trickier than others, but on the whole you’ll probably end up with something passable.

After making the beaded wreaths (I made five in total!) I had spare thread on my shuttles. This time I forced myself to try something out.  To be honest, the main reason was that I’d seen some beautiful forget-me-nots at Chartwell and I love their tiny bright yellow middles with the blue petals (not grand flowers, but I really like them). I also keep thinking of simple daisies.  And sunshine.

As the beaded wreaths were flower based, I was wondering if I could make something that would have a yellow centre (in theory) and a blue outside. So above is my sketch. I actually don’t have any yellow thread. I should have an order going out in the post on monday!

It’s not the most original design, I do know that. (The central ring with smaller rings is relatively well established). But I worked on the stitch count – decided to make it less leafy and to keep it simple this time around.

When I loaded up these shuttles I’d sort of promised that I’d keep evolving the pattern, but the addictive part of my brain kicked in and so I carried on from where I was and stuck with that as a pattern. I’ve not worked on an edging pattern before and it feels oddly different. Its a tiny bit clumsy as it gets longer, but quite satisfying too. You can very easily see the progress you’ve made. 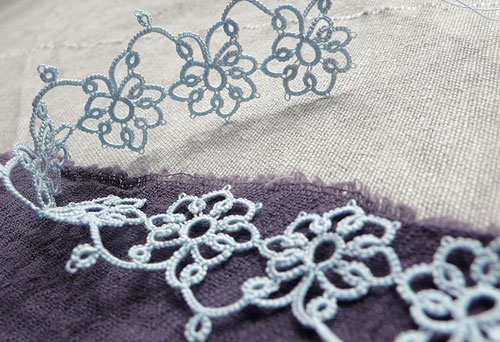 This is size 80 DMC thread, so it’s quite like a length of lace. Very flimsy – would make a pretty bracelet but it’s just not really thick enough. I like that it can stand up on it’s own though. Made for some nice photos while I was avoiding work…

Talking of which… I’d better get on with it

21 thoughts on “Sketching out a tatting pattern”