I think this has been the year of the sewing machine, for me. I inherited a Singer from an elderly neighbour, and my parents gave it a bit of love and attention (it hadn’t been used for years) and so all together, it means rather a lot to me. I’ve always been a bit nervous of sewing machines, they have a habit of running away with you, but this one is perfect! 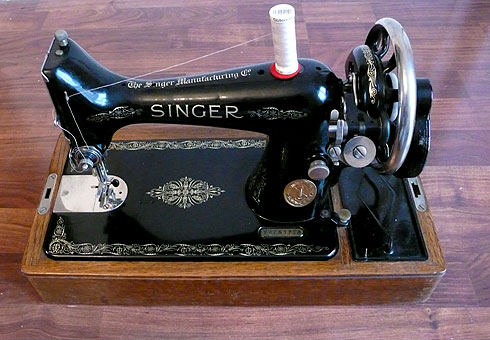 (All todays photos are terrible, incidentally. Camera only likes bright sunlight, and I haven’t got any.)

The machine isn’t complicated, it’s a 1930s Singer, and it only goes as fast as you want it to. Only does one stitch, and you can’t really change the tension. (Or you can try, but it doesn’t like it much). I’ve made a lot of lavender bags this year, but I also started my first patchwork quilt. It’s now at the quilting stage, and while it’s not *perfect* it’s going ok.

This is a corner of the quilt sandwich. I bought the batting from a shop I think I discovered through the local Ravelry group – Thread Bear. They were so helpful – showed me the different types of batting they had, made sure I got the right amount for my rather randomly sized quilt. They were also just… kind. They didn’t go ‘oh my god, what have you DONE?!’ which is what I was expecting, because I’ve just been teaching myself as I went along, nor were they patronising, which, I would imagine would be pretty easy looking at my, errr… skills. Even the other customers were nice. So, if you need anything, I would recommend them.

I’m about half way through the quilting – it’s not easy, as I don’t have a walking foot, so you kind of have to use your whole body to get the layers through the machine – but hey, I’m getting there! 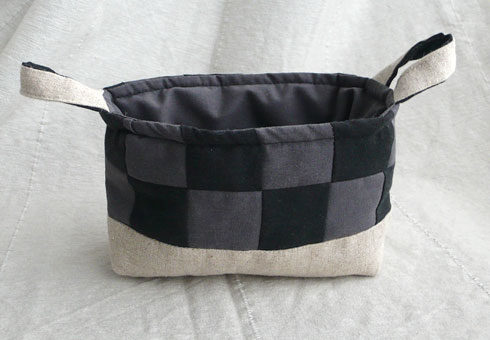 I needed to check I could actually get three layers through the machine, so I tested it with this fabric basket. It’s made of patchwork from two old sheets, and some linen. I was beside myself when I finished it – it stands up! I love it! No idea what I’ll use it for, but who cares! I made it using this very easy tutorial.

Once I’d finished that, and looked at the colours, I thought I would make one last gift for someone who likes motorsport – it’s a container really to put another gift inside, using the same sheets and some cream quilting cotton I had anyway:

We haven’t swapped presents yet, so he hasn’t seen it, but I hope he likes it. I used some iron-on interfacing for the bottom, as the cotton isn’t that thick. It’s lined with the grey cotton inside. I know… ridiculous, but I was pleased with it.

So, I still have the quilt to finish – need to finish the quilting itself, make the binding and then actually bind it. Having said all that, I’m starting to think about my next one! In the meantime, I’m about half way through crocheting the Tiramisu Baby Blanket for a pregnant-due-soon friend.

I should really stop writing this, and get on with it.

PS. Following the scarf conundrum, my mum liked them both, and so I gave her them both in the end!