I was hoping to get home in daylight to photograph these, but no such luck! So a speedy shot for now of two versions of a Mary Konior pattern – one blocked of course, and the other not.

The blocked one was started in a pub and finished on a train. The unblocked one was train journeys all the way.
It has to be said this pattern is ideal for a commuter – one shuttle, no ball – it’s just rings on repeat. You can tatt this sitting on a train, or as I ended up doing for a while, standing on a platform waiting for a train. (You have to do a bit of magic with the hook, if you’re not a built-in hooker, so to speak.)
It’s also the ideal ‘end-of-shuttle buster’. I emptied three shuttles making just the first one!*
Amusingly, each motif has a mistake caused by its surroundings. The one tatted in a pub has one ring too small – a friend arrived and I lost count of my stitches. The one on the train has seven rings where there should be six. The train was dividing, and I wasn’t 100% sure I was in the right bit. (You know that feeling?) In the end I decided to make two sections with seven rings and pretend it’s a feature. (I work with web developers, there’s a nice little saying: ‘That’s not a bug, it’s a feature!’ Works for them, it can work for me).
They might not be perfect, but I’m rather pleased with them, really. They were so enjoyable to make. 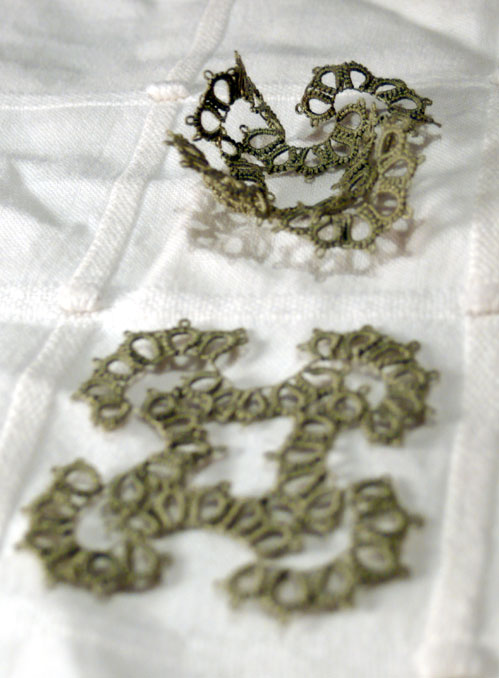 *why do I have three shuttles of the same thread? Well… it’s the only thread I have of this size, and I’ve decided it’s my favourite. But I’ve refused to buy any more nice thread until I get through some of what I have, and more to the point – finally decide on a bigger project. Also, I’m not sure what size it is… so I thought I should figure that out too. More of that soon.