These last few weeks have been rather busy, despite a ‘week off’. The week off ended up with me trying to fit two full time jobs into one working week, rather than just one, but broadly speaking, I succeeded more or less. I haven’t done much in the way of tatting though.

I did pack up the Mary Konior bookmark I made up for my mum. It’s her birthday next week. (Don’t worry, she wont read this, I haven’t actually told anyone I have a blog as yet). I put it in with a card, and all the colours worked together rather nicely, if I do say so myself. I’d love to take the credit for that, but it was just luck, to be honest. I’m just not that organised! 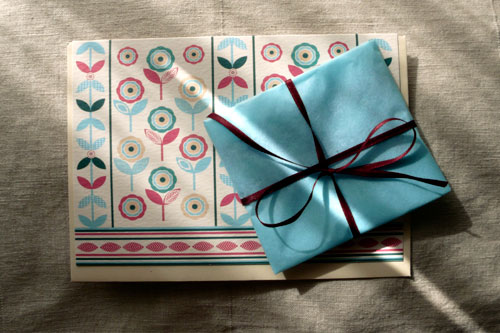 I do have a few days off this week though, and I’m really looking forward to it. I’ve bought myself some new tatting threads and I’ve been trying *not* to do anything with them all weekend. (I should be working.) I got them from Buttercup Miniatures again, and again, the service was great. If you’re in the UK and like DMC tatting threads, they’re a great alternative to Roseground, who only stock a few colours in DMC. They send things out really quickly, and were very gracious about the fact I’d given them an address for home and a postcode for work, by accident. If you like dolls houses, miniatures, tiny delicate crochet and other such things, check them out. I’m not affiliated with them at all, I just like the fact they ship as soon as they get your order 🙂 The two smokey greys are actually Venus thread, which I’ve not tried before. It’s size 70, rather than 80. I also bought a variegated green, to use in small doses, but it looked weird in the photo, so I left it out! 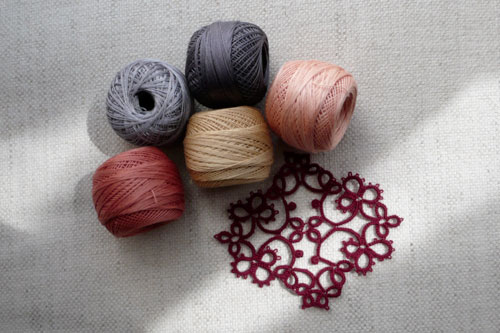 That’s the last bit of unblocked tatting I’ve done. I started it on a train, and finished in a car park. It looks a wee bit wonky here, but I’m hoping blocking will fix it. Oddly, it’s the first time I’ve used Josephine Rings in anything. It’s another Mary Konior pattern, of course.

Incidentally, this was done in size 12 DMC. I don’t like the thread that much  – but after using size 80, it’s so quick, thick n’ fast! I actually loaded it on my shuttle to practise clunys, but ended up making this by accident. I did try clunys in size 80, and I can make them fine, I just can’t pull the thread through to finish it off, without it coiling back on itself and snarling everything up. (Has anyone out there made clunys in size 80? Is there a way to get it not to coil back on itself?)

I’ve not crocheted anything for a while. Too hot, I think, and I’m still undecided as to what I want to make next. I need to make another elephant (a request) and I’d still like to make the Sunshine Day blanket, but need to buy some thread.

And finally, I *was* going to take a photo of the flowers in my garden. They look blooming marvellous, but sadly, every time I open the backdoor and try and take a photo a small gathering of very nice, but very bored people next door come out to watch! So take it from me, they look lovely.