Still here! And still making a few little things… Actually I would post more, but every time I take a picture of the things I’ve been doing, it never comes out quite the way I want.

Anyway. Just imagine all these photos are wonderful, and we’ll be alright.

I made these little roses a while back: 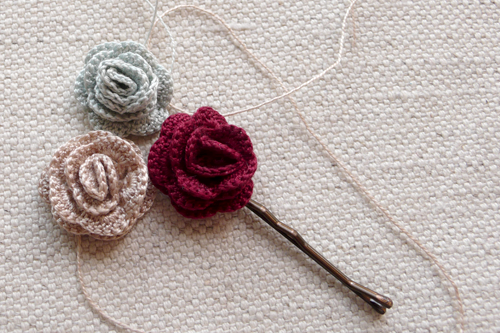 They’re crocheted in Perlé size 12. This thread isn’t bad for crochet actually, but I don’t like it for tatting. That’s a hairslide I made potentially as a little gift for someone, but I keep forgetting to give it to her. Not sure what to do with the others, they’re in a tiny jam jar at the moment, and I can’t help but get them out and look at them now and again. They’re really pretty in real life – even if I do say so myself.

This is actually a very delicate looking scarf in real life. It’s been impossible to photograph so far though! I’m probably about 1/3 of the way through. It’s ‘angel hair’ weight yarn – very thin, basically, and I’m using a 1.75mm hook. Why on earth I decided to make such a dense looking scarf with such a light thread, we’ll never know – but the different tones of green are really beautiful; it looks like dark moss. I did actually crochet quite a few rows on the train, which is a first for me, as that time is usually reserved for tatting. Usually i think crochet projects are too big to carry around, but in the beginning this packed up really small.

I’m also working on another broomstick lace scarf. It’s in the same bamboo yarn as the previous one, but in blue. No photos of that yet. 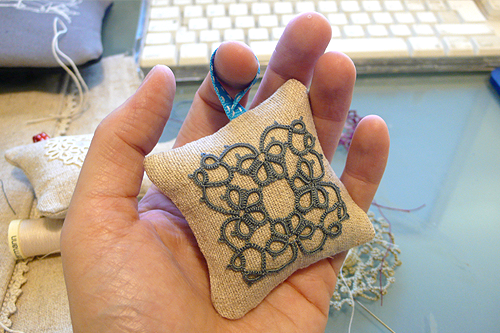 I had a few friends’ birthdays recently, so made some more lavender bags. Three in fact – one of which is above.

Then I made another one the same as that – and yet another the same as the one in the post before this. I know. I should mix it up a bit, but when under pressure on the train or bus, it’s easier to tat what you know!

I also got some new toys! A Hera marker (the white thing, above), which is for marking cloth by putting in a visible crease, and a rotary cutter. They’re both great actually and, well, given time, I might actually be able to make my lavender bags square, or at least straight. Ahem. No point rushing into it though. Both of these tools came from Quiltessential in Derbyshire, where a very nice lady let me try out two different types of rotary cutter before I made my choice. I also bought some lovely fabric, but more of that another time. If you’re anywhere near Derbyshire, it’s worth a visit.

And finally, this was another little experiment. Its supposed to be flat, but it’s so pretty as it is. It’s size 100 thread, and I made it on the bus. Sometimes it amazes me that I can make such delicate things. Not because I’m amazing personally – but you know. I just need to make one flat, and then I can get on with the next round. Believe it or not though, I have yet ANOTHER Mary Konior posy on the shuttles to finish first. I’m such an idiot.