I went to the Knitting & Stitching show at the weekend, in North London. I had a great time – and an unexpected companion. Originally I’d planned to go with my mum, but various things conspired against us, and so I ended up thinking I’d be going alone.

I seem to be one of a small number who actually ends up talking to people on public transport. Over the last 5 years or so I’ve acquired a few ‘bus stop friends’ and a ‘tram friend’. We’re a bit of a gang at times – there can be up to 5 of us on the way to work in the mornings. After a chance conversation I found out a while ago that my tram friend makes lace! Odd thing to find out on a tram. So, after another chance conversation last week, in which I found out my tram friend wanted to go to the show but not alone, we made a hot date and went on Sunday.

And a very nice time we had too. We walked our legs off. Me and a lady I’d never spent longer than 15 minutes with before.

Anyway. All that aside, I bought some quilting thread, which I assumed was around size 100. It looked like very shiny Valdani thread – especially as there was nothing else on the stall to compare it to.

When I took off the wrapper I couldn’t wait to get started and see if it was tattable – and so, as ever I started on the train on the way to work. (I have no train friend – the trains are too irregular, so the people are rarely the same!) 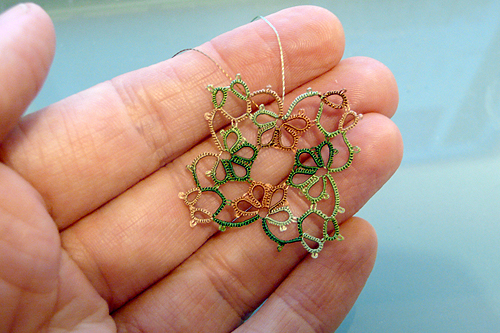 Needless to say, starting on the train doesn’t leave you with a ton of pattern options available, so I tatted a pattern that was already in my head – good thing about that being that I have alternate thread versions available for comparison..

So the white you see here is size 100. Looks huge by comparison.

After holding my breath and being very careful all the way round, the thread snapped on the last ring, so I had to join in new thread. It’s very shiny, so slips along easy-ish, but very thin, so breakable. You can also see the thread separating on the picots, which is annoying – and another problem is making the picot big enough to get a hook through.

Still, I enjoyed making it, and it’s nice to see it finished. I have a ton of this thread (it’s rayon) so if you want to try it for yourself, leave a message in the comments and I’ll send you some in the post.

—
ps – I did finish the piece in the previous post, will blog it next time!

3 thoughts on “Tatting with quilting thread”