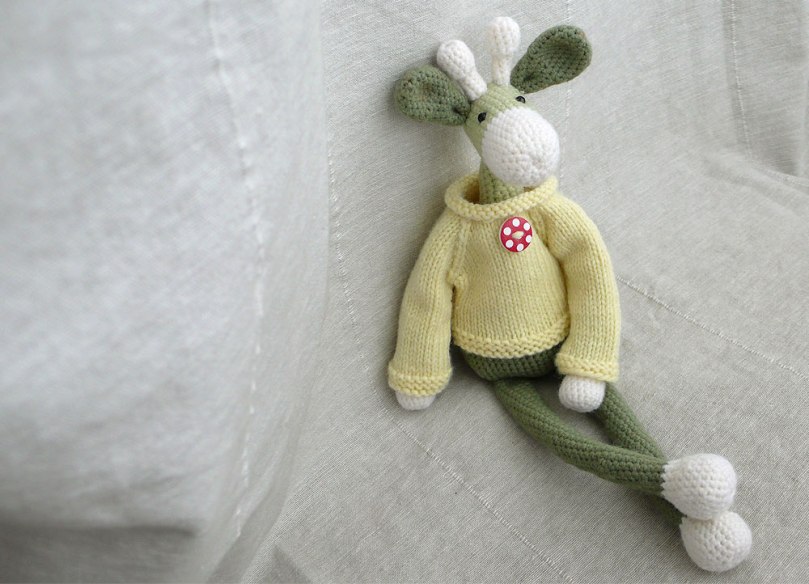 This wee fellow is off to a new home tomorrow. He’s going to live with a little three year old girl, called Scarlett. I would be more concerned, but she’s taken excellent care of the monkey I made her in 2013, so fingers crossed! I hope she likes him and plays with him as much, and as carefully (!) as she does with the monkey.

Here he is, as naked as the day he was born, in all his crocheted glory. And looking rather embarrassed about it too. It’s a lovely pattern – although as ever, crocheting arms and legs drives me  bit nuts. I always end up missing a stitch somewhere along the way and having to add one or two back in later. If you are in any way giraffe inclined though, I would recommend the pattern and you can find it here. I chose green for mine, because I think it’s nice for little girls to know that colours other than pink are available!

True to form, I made a giraffe scarf. It actually matches the one I made for the monkey, but I think that’s purely because I used the same logic by accident – “I should probably add something scarlet”. I’m nothing if not original…

But then I thought he looked a bit naked. And maybe a little cold. But what to make to warm up a giraffe, other than a scarlet scarf?

A wooly jumper of course!

I was in a bit of a rush, as I desperately wanted to finish this in time for Scarlett’s birthday, so I chose a basic, one-coloured pattern. I was also worried I wouldn’t know how to make it, so I thought the simpler the better. In the end I went for another pattern from Little Cotton Rabbits and it’s great! It’s knitted flat, and you start with individual pieces, which come together at the chest. You have to stitch it together of course, but its not hard and looks great.

And look! There’s a little button fastening at the back, which means…

That it’s easy to get on and off again! Quite important I think.

I adjusted the pattern a little bit – longer arms etc – and I think if I were a more skilled knitter I’d’ve taken it in at the sides to suit his body shape a bit more, but in the end, I was quite pleased with it. It looks nice and cosy. The button at the front is just for decoration, incidentally.

And so there he is. All nice and warm and ready to meet his new friends.

You know what’s also a little funny about this? This is the first jumper I’ve ever knitted! And yes, I am still working on the Brooklyn Tweed Boardwalk pattern, from ages ago! Must get started on that again now.

12 thoughts on “Knitting and crochet, the best of friends”