How did it get to be December – and so close to deadline for Christmas post? Yes, it’s that time of year when you wish you’d started making things for Christmas in August. I’ve been a bit quiet on here recently, but I have been making things. I’ll try and get some pictures over the next day or two – if we actually get some decent light. For now though, a tatting update.

Just like everyone else, I’m manically making snowflakes. Well, more or less: 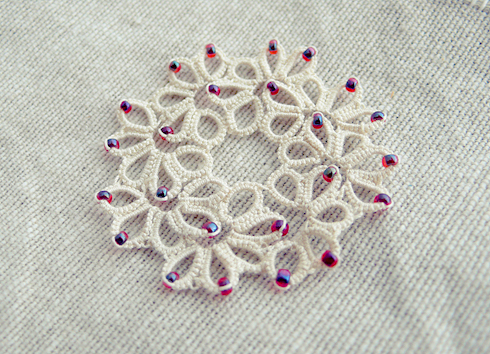 As it happened, I had some spare (size 80) thread on a lone shuttle that I needed to use up. So I *had* to make one of these really. And for the first time, I’ve used beads! I really like it actually. Looks a bit spiky in real life – like a snowy holly wreath. Umm, I also had another shuttle of thread to use up so I’ve got another one on the go, with different beads. They’re coppery, and really pretty. Next year though, must find an addiction for a different pattern, this is getting silly. 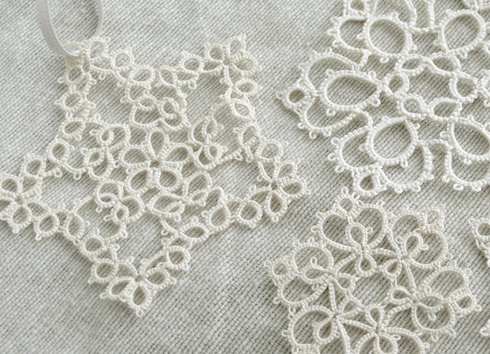 So this one, I started, or attempted to start at the local Ravelry group meet up. We met for breakfast (sensible breakfast, in a pub, at 10.30am not too early), and I just couldn’t get to grips with it. For a start, I hate leaving bare threads when I make small flowers like the one in the middle, and so it worked out at 5 rings, not 6. Then trying to chat and read the pattern proved impossible, as it’s not worked in the way I’d worked out in my head. So I came away with nothing done! Managed to get to grips with it at home, and then finish it on the commute. 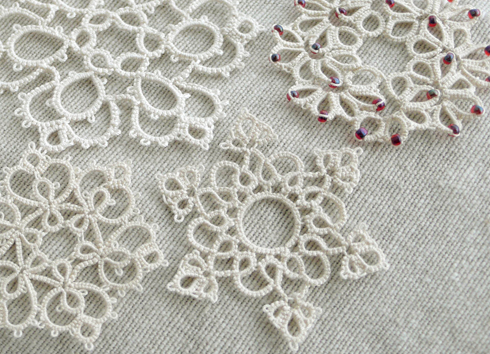 The one sort of centre in this shot, everyone who tats/blogs has made recently, and so I decided I should make it too. It’s a lovely pattern. From the look of it, this is size 80 thread though (I’ve forgotten), which makes it a bit weeny. Having said that, I’m still tempted to make another one, but with beads added. The beads for that size are too small to thread any way than on the thread at the beginning though, so I can’t do anything too tricksy. Also if you’re adding beads to your tatting, this is very useful to read. It talks about the difference between adding beads to the core vs shuttle thread. (Sadly, on the posy with one shuttle, both threads are the same!)

And finally, I bit the bullet and bought some size 40 Lisbeth thread. I noticed Fox saying she liked it, and recently I’ve been thinking some of the things I tat are a bit tiny to use. 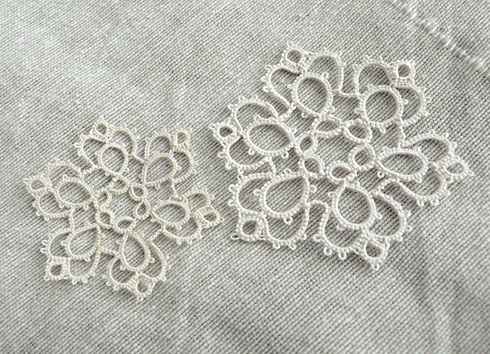 This is one of Jon’s patterns. The left is size 80 and the right is size 40. (I made another of Jon’s patterns in size 40 too, but I’ve sent it out already). I dunno. I’m just not sure about tatting with thick thread. For some reason I just don’t enjoy the feel of it so much. Everything just looks gigantic! I’ve got a few things in mind to try next (like clunys, which always get twisted at size 80), but on the whole, while my eyes are able to cope with it, I think I’ll stick with smaller thread, I’ve got used to it now.