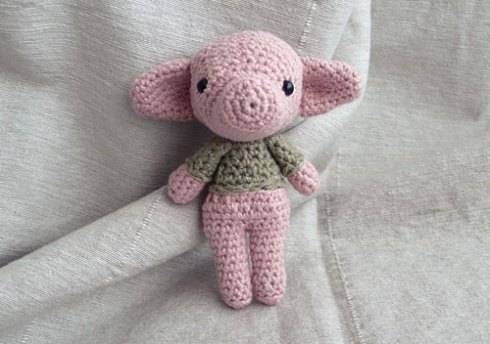 This little piggy has been a bit frustrating. I’m not sure what to do with him/her, but I think it’s not over yet. This is body number two – I actually finished the whole thing once, lived with it for a week or two and then took it apart. This is the body as written in the pattern, but I think it’s a bit messy. Too many decreases, which just don’t look good. It’s a shame as the head is such a great shape and so nicely written up, but I just think the body doesn’t do it justice. It also doesn’t suit a scarf – or anything else I can think of as yet – to distract you from the not-very nice shape. Will think on. Any suggestions appreciated! Poor little piggy! 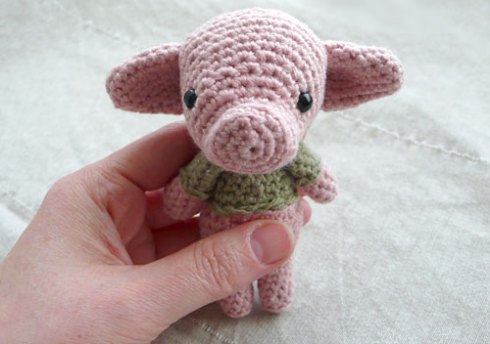 I’m a fan of the yarn though – it’s lovely! It’s the Sidar Simply Recycled, and is lovely and soft. The colours are also really nice, quite muted – a bit more natural looking. I’d definitely use it for making toys again. This little chap is much bigger than the last one.

This is an experiment, made the other week. It’s tatted in size 40 thread, and is actually the pattern for a bracelet. The thread is much thicker than I would normally use – but probably a bit more of an appropriate size for jewellery – that said, as a bracelet I think it would drive you nuts! I love the idea of tatted daisy chains, but maybe just not this one. Rather than waste it I made yet another lavender bag. (I think I underfilled it too – after all my months of overfilling I’ve tipped back too far in the other direction!)

But look at this – it’s knitting! A waffle scarf (ravelry link), and it seems to be going ok (she says, touching wood, with crossed fingers). Now I’ve got the hang of it, I’m really enjoying it. It’s a very simple pattern of course, but nice for a beginner, and a great TV project. I’ve already planned my next project – bought the pattern and the yarn, but I’m going to be good and finish this first. Very exciting!

15 thoughts on “A mixed bag (may not contain bags)”