I know you’re supposed to put the most enticing photo at the top of a blog post, but it’s been a long day and this one made me laugh the most. Hello! There’s been a bit of a pause on posts recently as I’ve had no chance to take photos of anything I’ve made. I leave for work in the dark and it’s dark when I get home, and my stroppy camera hates anything but sunshine. I did manage to grab a few snaps this morning though, and so here I am.

I made the monkey up there years ago. It’s the second toy I ever crocheted actually, and sits on my boyfriend’s desk. The sock I made about a week or two ago, and it’s a mini Christmas stocking, from the bottom pattern here. It’s so cute in real life! It’s probably not the best knitting you’ve ever seen in your life, but it’s the first time I’ve used DPNs and I actually managed to make a decent job of mattress stitching it together. If you’re a good knitter, I think you’ve have it done in no time. I know the colours aren’t very xmassy, but it was a test really, to see if I could do it.

I made another version of the pouch of pain. Still not great, but better than it was. Annoyingly this one seems to show up the tightness of the colour changes more than the other one (it’s actually a little better in real life than it looks here.) The pattern suggests that you go up in needle size when you start the leafy design, but I don’t have that many knitting needles yet, so I couldn’t do that. It’s quite a bit smaller than the first one… I was tempted to line it with fabric, but it’s just not that great, so I don’t think I will. Anyway! Nothing ventured, nothing gained. Oh – and I did the increases this time, so the base is rounded a bit. Again, looks better in the flesh. 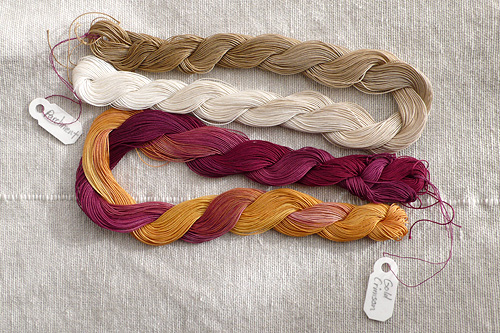 I treated myself to these lovely hand dyed threads from Yarnplayer recently. They’re size 80, and for tatting. I’m really looking forward to using them, although I’m undecided yet as to what I’ll make. You have to be a bit careful with variegated threads – if the pattern is too complicated it can end up looking really confusing. I still think this is one of my favourites. That said, it’s getting to snowflake making time again. Gah! I was going to start early this year.

I’ve been making this again on my commute. Almost there, and then the ends to sew in. It’s in the Valdani quilting thread, which I do have a certain affection for. Occasionally I panic as I think it might snap, but that aside, I like the fact it’s ‘dull’ – there’s no sheen to the thread. I made a lavender bag earlier this year with the same pattern, and actually I love it. Something about this colourway on linen works really well.

Aside from all that, I’m still knitting my Guernsey Wrap (you can see the beginning of it here). I’ve become a bit desperate to get it finished now as winter really feels like it’s arrived, and I’d like to wear it! I’m over half way, but I need some dedicated time on it. I was hoping today would be the day, but I got sucked into day-job work instead. Haven’t managed to fit any sewing time in either, but I did buy some beautiful fabric a few weeks ago.

So much to do, and so little time! Better get on with it.

10 thoughts on “Hey monkey! Show us your sock…”