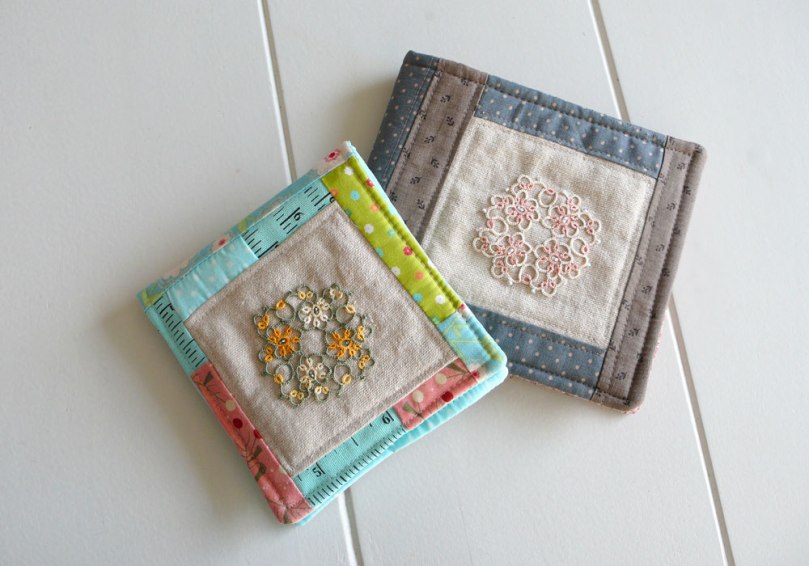 I made these needle cases about a month ago. They’re very wonky, and I just rushed in and made them without thinking really—which I must admit, I really enjoyed.

I used up lots of little scraps and just made it up as I went along. I like the fact that one is really bright and cheery and the other… 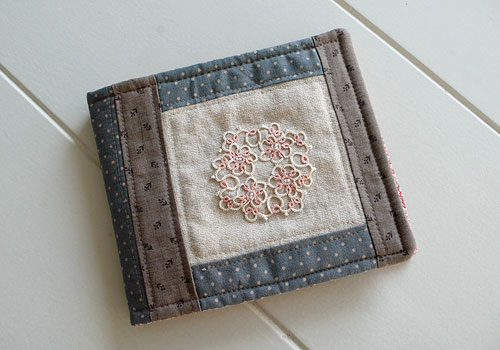 Feels a little more muted, a little older, perhaps. I was of course using up my tatting; thought it might make a change from lavender bags! I made the brighter one second, and actually remembered to put some pockets in it. To be honest, had I been thinking I’d’ve added decent pockets to both, maybe in different orientations. That’s the only thing with being spontaneous, afterwards you think of all the things you could’ve done. That said, I enjoyed making them and I did actually need a needle case. (Although maybe not two.)

The felt inside is SO cheap and nasty! It’s awful – thin and stretchy. I must actually buy some decent felt. Anyway – that’s not the point of this picture – the point is I used the scalloped stitch on my sewing machine to make the ‘pages’ look a bit nicer. It’s the first time I’ve used a non-standard stitch on a sewing machine, so that was very exciting. I’m still alive to tell the tale. 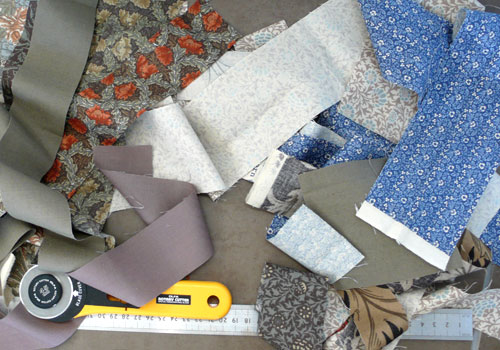 This is what the kitchen floor looked like until about 10 minutes ago.

And the living room floor.

Why work in one room when you can turn the whole house into a tip?

About a year ago I bought a selection of beautiful William Morris fabrics. I love every single pattern—but to the point where I was thinking that I would never ever use them because I could never do them justice. I’ve looked at a million patterns, simple and complicated. I’ve decided what I’d do and changed my mind a million times. You know the saying ‘money burns a hole in your pocket’? This weekend the fabric finally did that to me and I just decided to get started.

The patterns are complicated so it needs to be a simple quilt design. I decided on a strip quilt and started cutting strips. Until I came across one pattern that would be better as a traditional patchwork, so I cut some squares. Then I cut some more squares. Then I couldn’t decide *what* I should do – and of course cursed myself for ‘rushing’ in. (Despite the months of deliberation).

In the end I decided to make blocks that are all this size, and then I will put the blocks together

I think this should work. It should use up the bits I cut at random and I can make each block relate to the previous one or any of the others and shuffle them about as I go along. I hope it’ll work anyway…

The good thing being that it’s not *for* anything. I like making quilts for snuggling up on the sofa, so whatever happens it’ll work for that. And once I’d decided that’s what I was going to do, I quite enjoyed it, and that is the point of it, really.

Sheesh. Why do I make everything so complicated?

Hope you’ve all had good weekends.

(Also, thanks to the new people who are following me. Feel free to comment, I don’t bite 🙂 )