How on earth is it December? What a weird year. I can hardly remember… well, the summer even. It feels like so long ago. This year feels like it’s been 5 years in 12 months, without time to catch a breath. A never-ending stream of things that needed to be done. I’m not sure why, but it’s been a restless year. There’s been no rhyme or rhythm to it.

I haven’t had a lot of time to make anything, so the things I have made have happened a bit sporadically. I had a huge panic about the yarn I have just sitting around in boxes, so I made this wee bear, but she never got her own blog post.

Made from Lorna’s Laces sock yarn, she’s actually a really nice size. I think sock yarn could be a good weight for toys. I don’t love the stripes (bit busy), but they’re not as bad as they could be. The pattern (as is often the case) is from Little Cotton Rabbits.  In this photo she has no nose (how does she smell?! etc). I ummed-‘n’-ahhed a lot about whether or not to give her a nose, and seeing this photo I’m still not sure it was the right thing. I think she looks quite cute without it.

Here she is with a nose, and with my favourite elephant for a size comparison. And here she is larking around with the rest of the gang…

The dress was another random make to try and get rid of some cotton I don’t really like! To be honest it doesn’t really fit her – and nor does this pink jumper. Both a bit too big. 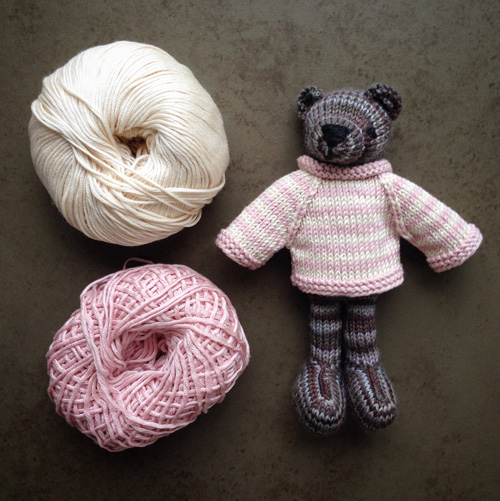 I really did think about buying more yarn to make her some clothes, even though the whole point of making her was to use up yarn in the first place. As I type there are 2 arms, 2 legs, a body, 2 ears and an almost finished elephant’s head in the kitchen, using up more of the yarn stash. I think I started that in August maybe, but I just haven’t had any time to finish it off.

I did finally make a human sized jumper though! But it was for a very small human. A friend had a baby, and it seemed like a sensible, and hopefully nice thing to make a little jumper. There were a lot of stitch markers involved which almost gave me a nervous breakdown in the beginning, but once I got going, really helped.

There’s a small cable down the front, which made it a bit more interesting to knit. The sleeves were a horror though – I just could not get nice purled cuffs when I was knitting in the round. I was on DPNs (ie, not using the magic loop on circulars) and I’m not sure if it’s just harder on DPNs or I was doing something really wrong, but after 3 attempts, I decided to go for ribbed cuffs. (You don’t even want to know about the language that got me through this phase.) After a severe bit of blocking it turned out ok, I think. Not perfect, but just about ok enough to gift. 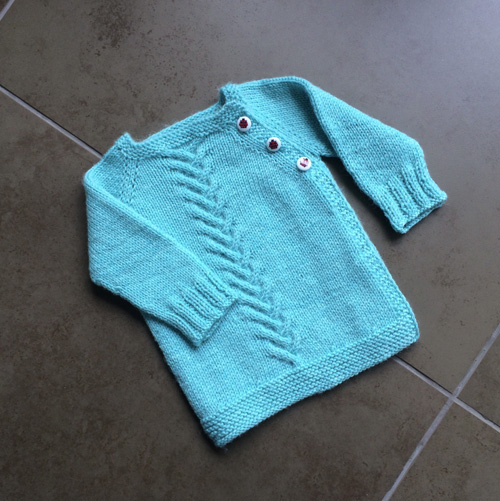 Actually the mother of the recipient wrote me an incredibly nice thank you note. The baby is still a bit small to wear this (it’s for 3-6 months I think) so we’ll all have to wait a bit longer to see if it’s actually functional at all!

I recently moved house. And I also recently had to go away for a week for work. Could I find my tatting bag? No I could not. It’s somewhere in the house purposefully placed so I can find it easily. WHERE THOUGH?! Where is it? I just can’t figure it out. This means I travelled with nothing but a book for entertainment, which must be the first time in years. Tatting is so small, you can always find room for it so I take it with me almost everywhere. It feels weird not having shuttles to hand even if I haven’t been tatting for a while. I’ll have to start yet another hunt. I haven’t made a single tatted snowflake this year.

And on that note, I should go. There are obviously, more Things That Need To Be Done. I hope that wherever you are, you have a good holiday season, and a great new year!

One thought on “A bear (left) behind”