I’ve neglected this blog a little (ok, a lot) as I’m still in craft limbo. I talked before about not being able to settle into a project and it’s still the same. Starting and then not understanding a human-sized pattern hasn’t helped: 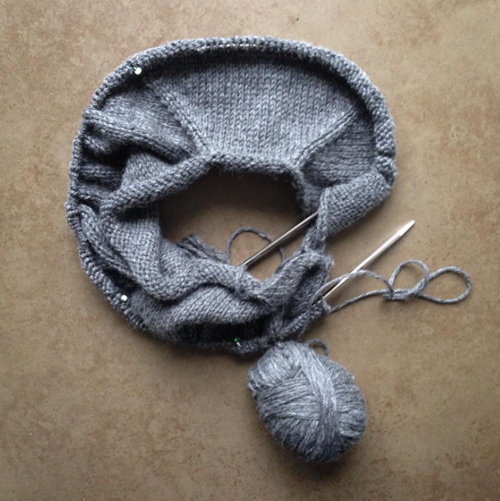 This was going to be my go-to project for a bit. ‘Go-to’ projects are good I think – you know what you’re working on, there’s no decision to be made you can just pick it up and carry on. You just relax into it and the process itself is relaxing. Getting stuck means that I kind of feel bad for not persevering, but then after a busy week at work I’m not sure I can face the perseverance. Then what do do? Not skilled enough to make what I’m supposed to be making, but still want to make something… so…

I made this chap recently:

And actually, he’s very badly knitted, but I am a bit in love with him. He started out with a pink embroidered nose, which I disliked, so I left him as just a head for ages. A visiting friend picked up the head and berated me for not giving him a body. Feeling bad I unpicked the pink nose and did as I was told. (Who knew you could also unpick a nose…)

I think he’s a really nice size. And also, maybe I’m really just a kid who hasn’t grown up… I really like making toys. That said, this Millennium Falcon belongs to the Mr:

Aside from that, I stitched up a few lavender bags from the tatting I had lying around:

This is kind of hilarious because honestly, that little ribbon is so off centre it’s a miracle it’s even in the shot at all. The power of photography, eh? I did get a bit impatient with the sewing machine. I always want to be better at things than I am.

Time this year has also been taken up in other ways. I’ve worked on our little garden a lot, and it’s been really lovely to watch it grow. On a work trip to Boston (USA) earlier in the year I had a spare Sunday afternoon and walked to the Isabella Stewart Gardener Museum. There is a central garden inside the house, and many of the balconies had window boxes full of beautiful trailing nasturtiums.

The lighting was a little tricky, but hopefully you get the idea. (And yes, it does look very Italian, despite being in the USA). I came home and immediately planted a packet of mixed nasturtium seeds, all of which dutifully sprang forth.

People talk about ‘splashes of colour’ – I’m not sure there’s a more apt description. This photo was taken a week or so ago. They look a bit battered today as the rain has been so heavy this weekend. I’ve also been baking a fair bit.

These are ridiculously easy ginger biscuits. A little darker than usual as I ran out of sugar and added some black treacle. (Good move). Baking has all the joy of craft I think, with the massive added bonus that you can eat it at the end…