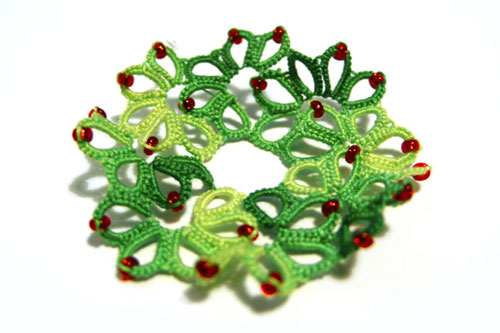 One of the things I like about crafty stuff is the seasonal rhythm. It seems to happen more in Autumn and winter with tatters perhaps, but I love that around september tatters often switch to autumnal colours, and tat leaves and pumpkins and other things. In the winter of course everyone switches to snowflakes, because if there’s one thing tatting seems to be made for it’s snowflakes.

I’m not sure what’s happened this year, but time has run away with me completely! I’ve either not had a seat on my commute or  it’s been really squished, or my hands have been too cold. I’ve been working late for the last month or so too, and so maybe I’ve just not had the right bit of my brain available by the time I get to the train. Anyway. No snowflakes. I also realised that I’ve not posted a single card as yet, and there’s one friend of my Mum’s to whom I usually send a snowflake. This year I thought I would finally get around to tatting this in green with beads and send this instead. It’s unblocked in this photo – I must admit I do like the organic shape of it like this. You can’t see how lovely and glowly the beads are in this photo, but they’re a really nice ruby red.

It’s tatted in size 80 dmc, and so there’s not stacks of beads. I know other people make this pattern with beads at every join, but it’s too hard to get a needle / double thread in a bead like this to attach beads to a joining picot. (I know if you don’t tat, that makes no sense, but just incase you do, that’s what’s going on).

Anyway. Just the one photo, as I need to get this blocked and try and see if I have any Xmas cards in the house at all. (It’s generally a blessing that I work away from shops, but occasionally a curse).