It looks like someone has been playing around with my tatting. He does look rather happy about it though, basking in the sunshine. This little fella is called Treeson. He’s been sitting on the shelf for ages and begged to be included in the photos at the last minute. What I think he really wanted was to be dusted. Ahem.

Moving swiftly on, this little lady is clearly horrified with the very idea of tatting. Either that or she just hadn’t realised beads were a *thing*.

But a *thing* they are. I think the ones she finds so horrific are my favourites actually. They look really glassy – they’re really pretty. I like them with the ecru thread too, even if they are a tad large.

When I bought those it was on a whim — I was actually looking for tiny pearls (well, fake pearls). I was at the Creative stitches and Hobbycrafts show at ExCel. It was packed though, and I couldn’t really find what I was after. I bought these, which I’m in two minds about:

They’re a bit hard to photograph. I like the subtlety but these are clearly tiny pieces of tube, so they’re not rounded at the edges, if that makes sense – and I think they’d be nicer if they were. I think this will actually look nice sewn on to linen (was just going to make a bunch more lavender bags or something). It’ll be subtle, but pretty  – not quite as girly/pretty if you see what I mean. A bit more understated. We shall see. 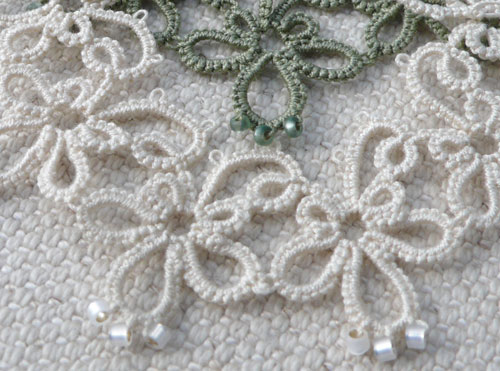 Same pattern – I used these beads on a bag I made for my mum – and they’re actually tiny (the thread is size 80, so quite thin – close up photos are a bit misleading). For the bag, they’re actually sewn on, rather than tatted in. You can just about see here though, how nice they are compared to the white ones – they’re rounded at the edges. I think on the whole, they’re too subtle on the green thread – too good a match actually, for things bought independently. Lovely beads though. Might try them tatted in to the ecru. (Apologies, I have no idea where on earth I got them from.)

So yes. Been a busy few weeks tatting on the train, which I’ve really enjoyed. There’s something great about having a pattern committed to memory so you can relax your brain to and from work – while being productive at the same time. I’m a strong advocate of repetitive craft as meditation, I think. Keeps the stressy part of your brain busy, and leaves the other part free to concentrate on the bigger things.

Now, if i could just get this one to calm down…

Have a good weekend – and if you’re in the UK, a good bank holiday!

9 thoughts on “Not everyone loves tatting…”