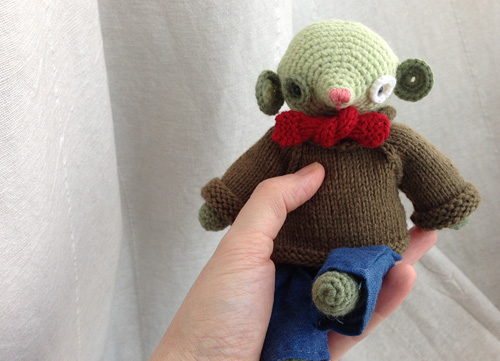 You know some weeks, nothing seems to work? I got so frustrated finishing this chap on Friday that I threw him in the bin. My boyfriend spotted him in there yesterday and took him out – then gave me a telling off for being mean.

He’s supposed to be a little mismatched, his ears and eyes are different, but really, his jumper was actually supposed to fit. I had to unpick half of the jumper when I realised I’d mis-counted due to a phone call. Then I realised that even after re-making, the dimensions were never going to work. The nice cuffs were going to be hidden as the sleeves need rolling up, and don’t even talk about the neck… (I’m so pleased I guessed it all correctly for the giraffe – looking back it’s a miracle!) 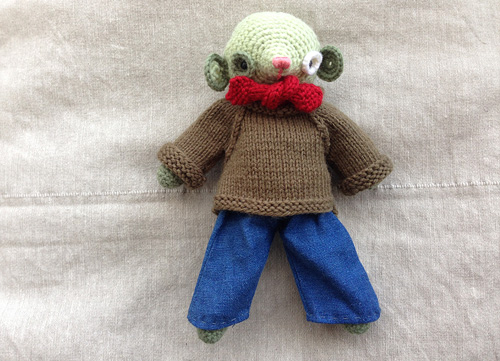 In the end I stitched him into the jumper at the back, so it kind of fits, but it’s not ideal. I also made him some trousers – it’s not that easy making trousers, is it?! I just guessed the shape; imagine two pieces of fabric shaped a bit like an upside-down ‘V’. I ended up cutting them in half and re-sewing down the centre to get the right shape – but I think I might understand a little more about trouser construction than I did before!

Actually after all that I really like him. In real life he looks like quite a gentle, bookish soul. It’s really the jumper that does it. Now I can actually knit I think every crocheted toy needs a jumper. Due to the slightly delicate clothing construction he’s definitely not for playing with, so I think he’ll live with me. I have a feeling he’ll be happy on a bookshelf though – I just need to be nice and apologise for throwing him away. (!) 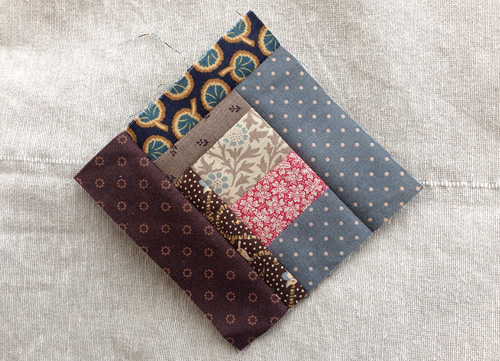 Before I started fixing him yesterday, I got the sewing machine out and had a bit of a play. I’d already decided what I wanted to make, but I fancied playing with a few scraps first. These were all small pieces from my scrap bag, but I think they go nicely together. Not sure what I’ll do with it yet.

This is not the most inspiring photo, but I decided to make a needlecase, loosely based on this tutorial. The tatting has been knocking around for ages… Eeek, since 2013 in fact! I thought it might be nice making something a bit less girly for a change.

This is what it’s like inside – a little pocket front and back, perfect for the essentials (like a rabbit). Don’t look too closely at the binding. Ahem. 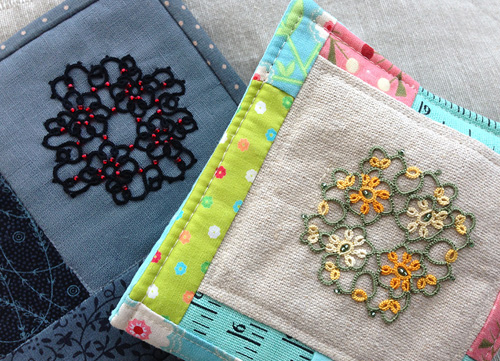 I love how different the new case feels when compared to the old one. And talking of the old one… I use it all the time.

You know what I’ve noticed? Everyone who makes a needle case and then photographs it does what I did up there ^. They show a perfect selection of pins or needles, perfectly aligned. Who keeps a needle case like that?! No one, surely? Certainly no one that ever uses their needles. 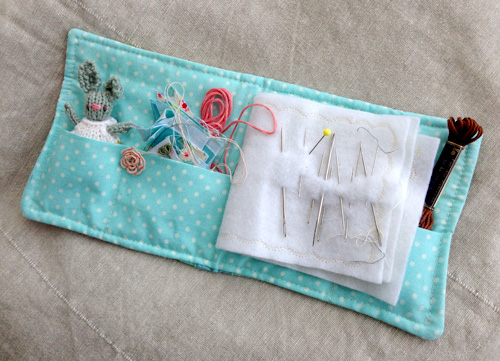 This is what the old needlecase looks like now. Its all bent out of shape and a mess.

But I love it.