Happy New Year! Hope you had a good break over the holidays and your new year is going ok so far.  I’ve not been the best blogger, I have to admit, but wow, December was busy. In between work and travelling for work I did manage to race through some knitting.

I made this little chap:

He is, I have decided, the gift for the baby I was knitting the original rabbit for. After thinking about it, I decided that you need something a baby can have a bit of a chew on, chuck about a bit, squeeze and pull in any direction. Something a more solid shape and construction seemed like a better idea, and so I went for this pattern. (Ravelry link).

Overall I enjoyed making him… until I got to the tail. It’s knitted on DPNs and just didn’t end up as neat as I would’ve liked. I also decided to sew on fabric eyes, rather than the usual plastic eyes (better for a baby). This was a bit of a pain as it turns out the black ‘craft felt’ from John Lewis is thin, disintegrates quite easily and is just… not very good quality. A lesson learned. 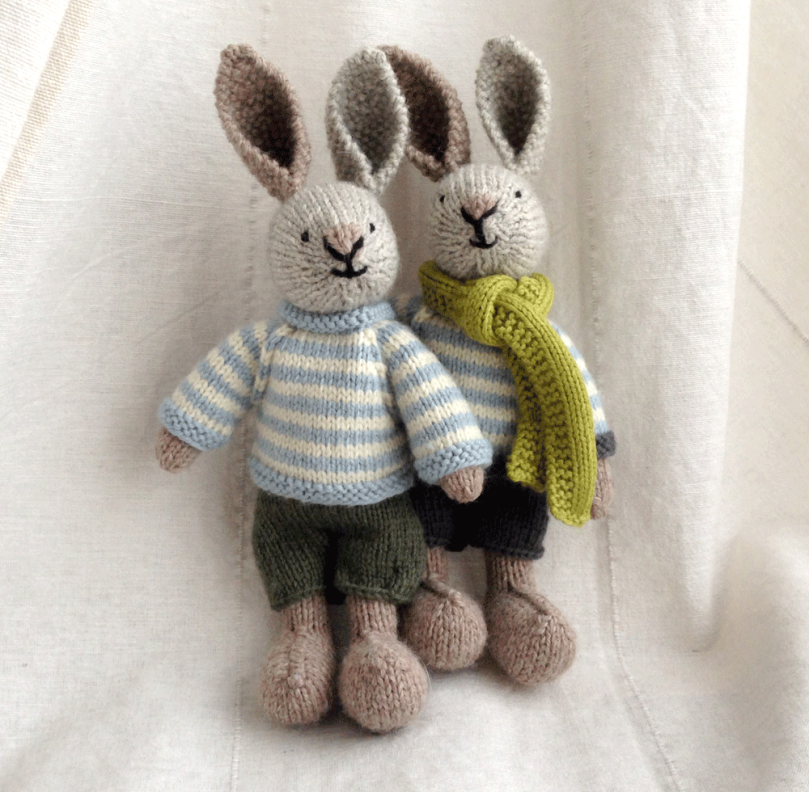 And back to the rabbits… What a delight to knit! I’m genuinely thrilled with how they’ve turned out. Of course there are things that could be better and neither was completely struggle-free but still they make me smile every time I look at them.

The pattern is from Little Cotton Rabbits. It’s the boy bunny with the piebald patch, although on these occasions I added the nose but not the patch. (I did make one head with the patch but wasn’t 100% happy with it. I’ll try it again another time though, because it is very cute). I just happened to have blue and white wool available for the jumpers and so I used that to match the pattern exactly.

They’re such a lovely size. They’re also exceptionally cute without being ‘twee’; no cartoony cutesy short cuts – no big eyes or overly large heads. Something about them being small but perfectly proportioned makes them even nicer.

I made the one with the scarf at the request of an ex-colleague. He said that the only thing his wife had said she actually wanted for her 50th birthday was “one of your knitted rabbits”. Which was of course very flattering but having only ever made one before I did say he’d have to turn a blind eye to the odd wrong stitch!

Here’s a slightly odd picture of their bums! They each have a little tail that pops out of their shorts. You can also spot the tiny button I used to close their jumpers. I love that you can take these on and off. Seriously – the jumpers themselves are so cute they almost give you a heart attack.

If you’re thinking of making one for yourself and wondering if you can do it, the answer is yes, you probably can. The patterns are well written and illustrated with photos. Anything that isn’t a knit or a purl is also explained and very easy to google for a video tutorial should you need it. They’re knitted flat and stitched together, which for me made it even better. While I hate sewing, I hate small knitting on DPNs even more. Knitting them flat was almost – dare I say it – relaxing.

They take a while to stuff and to sew together, but personally, I found it easier / more enjoyable than sewing a crochet amigurumi. I crochet really tightly and getting a needle through crocheted fabric was always a horror. I did actually make the second rabbit and decide I wasn’t happy with the eyes. After a lot of ‘Really? At this hour? GO TO BED’ internal dialogue I decided to snip them out and redo them. I’m glad I did, he’s much nicer now. It’s always worth taking extra time on faces I think, no matter what type of toy you’re making.

If there was one problem with this pattern I would say that it’s *really* addictive. They’re now all I can think about. I’ve already bought the pattern for the elephant though, and so will try that next. I must admit, I’m not expecting to do so well on that one, so will definitely start with the head first and see how it goes. (For some reason I started with the feet for the rabbits).

Anyway. Happy new year! Here’s hoping we always have a chance to sneak in a little bit of time for ourselves this year.

7 thoughts on “And then there were two!”